16 Days of Activism against Gender-Based Violence is an annual international campaign that kicks off on the 25th of November, the International Day for the Elimination of Violence against Women, and runs until the 10th of December, Human Rights Day.

As an organisation that focuses on “Promoting the Power of Everyday Activists”, TJD believes in the power of ordinary people to effect impactful and lasting change in their communities.

TJD’s campaign will feature and amplify the thoughts, reflections, voices and suggestions of incredible individuals on their website and through their various social media platforms throughout 16 Days of Activism.

The 16 voices are made up of representatives from NPO organisations and foundations such as the Kolisi Foundation, SaHarvest, The Embrace Project, Women Lead Movement, Langa for Men, The Uyinene Foundation and Girls against Oppression.

The voices of well-known celebrities such as Zolani Mahola, and TJD’s Goodwill Ambassadors Marco Spaumer and Craig Lucas will also be featured, as well as our partners The Waterfront and notable business leaders such as Jon-Foster Pedley and Pumela Salela. Various community activists from Justice Desk projects such as girl survivors of rape and young boys actively fighting against GBV will also be featured.

During this period, the 16 chosen voices will be taking on the role of thought-leaders in the GBV space, ultimately discussing the ongoing gender-based violence crisis our country is facing, how action must be taken, how activism can be used as a tool for change, as well as other suggestions for how we can successfully combat gender-based violence in our lifetime.

“Challenging gender-based violence is a collective fight. There are so many incredible people who have a voice and a way forward and we must listen. We can no longer work in silos, but must be encouraged to share our ideas, passions and plans of action.” says Jessica Dewhurst, the CEO of The Justice Desk.

Through this campaign, The Justice Desk not only seeks to raise awareness of our GBV crisis but also hopes to bring people together, inspiring one another to recognise the incredible power that South Africans have when we come together for change. By amplifying these 16 remarkable leaders, they hope to inspire others in contributing their own thoughts and voices, uniting in solidarity and raising awareness to the important fight against gender-based violence.

“It is not the job of just some of us to end gender-based violence, it is the job of all of us – and we cannot be successful unless we all play our part, not just during these 16 Days of Activism, but 365-days a year!” continues Jessica Dewhurst, the CEO of The Justice Desk.

From the start of the 25th of November, support The Justice Desk and their “16 Voices in 16 Days Campaign” which will raise vital awareness towards combating gender-based violence, but most importantly, inspire others to know that they too can be a part of the change.

Donate to Support The Justice Desk

Partnering with BackaBuddy, The Justice Desk has launched a crowdfunding campaign to invite the public to support two of their flag-ship projects, aimed at eradicating Gender-Based Violence.

The Ntsika yeThemba project aims to end Gender-Based Violence by equipping a generation of positive male role models who challenge toxic masculinity and GBV and promote equal rights and justice for all!

Through various positive role model encounters and mentorship initiatives and the use of outdoor adventure-based education, young boys from township communities, many without fathers or father figures, are being empowered to become incredible leaders and agents of change.

They are reshaping, redefining and re-building positive ideas and actions of masculinity.They are being taught how to respect one another, respect women, understand consent and be a part of building a free and equal country for all!

Ntsika yeThemba: “Pillars of Hope, Defenders of Women & Leaders for an Equal Society”!

Your donation will make it possible for these young boys to access: 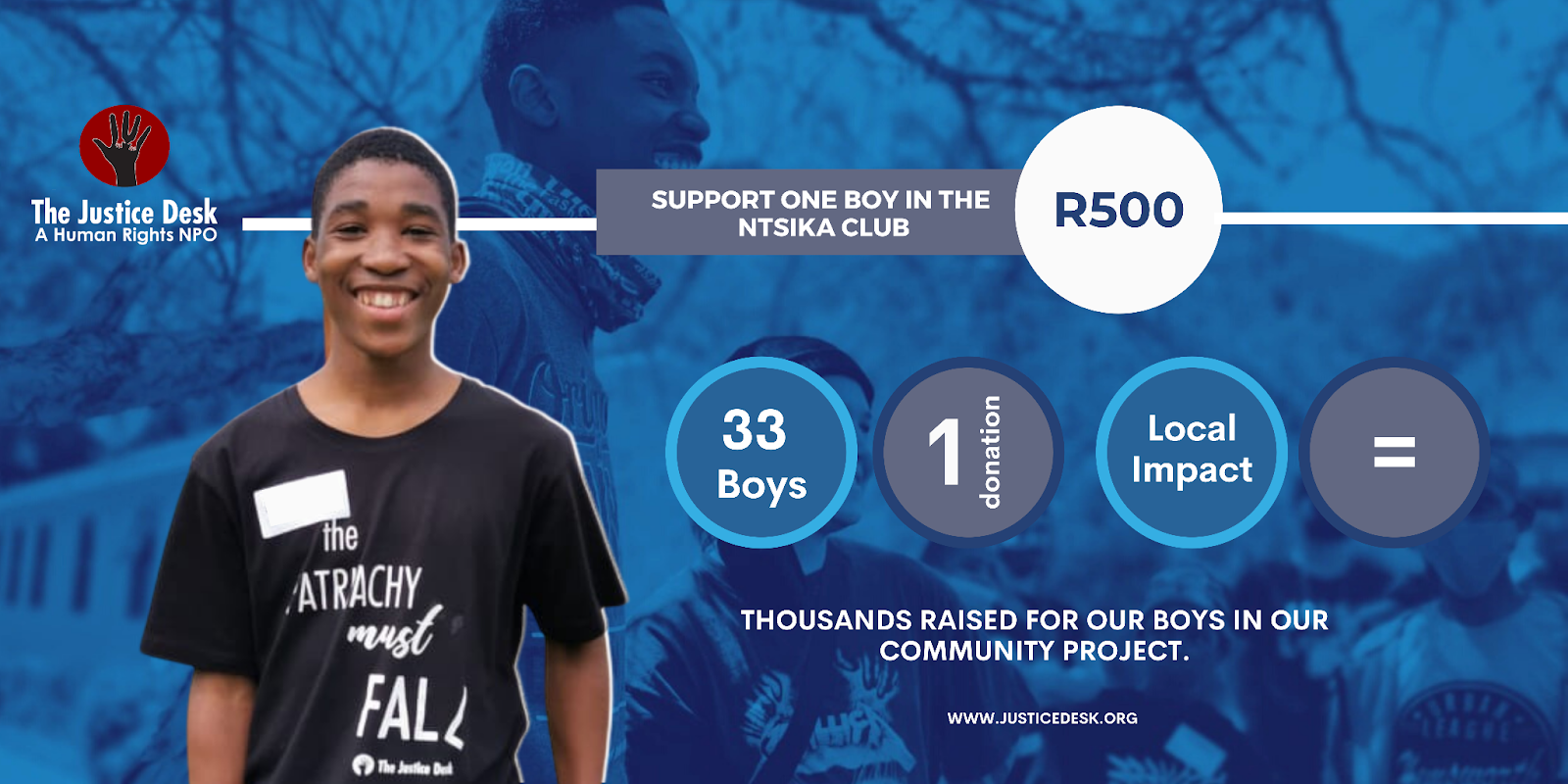 Donate to support this campaign on BackaBuddy:

The young girls we work with are between 9 and 19 and come from vulnerable communities such as Nyanga, Khayelitsha, Gugulethu, Langa and Bonteheuwel.

The project focuses on equipping young girls to lead their change, become community leaders and join a network of women supporting women within underserved communities and townships.

Our young girls can achieve this because of the quality services and education at the Mbokodo Club.

Your donation will make it possible for these young girls to access: Donate to support this campaign on BackaBuddy:

Support Porky’s in spreading kindness and helpful information by making a donation.

Donate to our BackaBuddy campaign:

Reading Time: 3 minutes On the 3rd of August 2020, Hlengiwe Msimango (30), affectionately known as ‘Pearl’, lost her…

Reading Time: 4 minutes Turning words into action, SA Women Fight Back, collaborates with sister organisations to offer gender-based violence survivors counselling and healing courses after they have experienced trauma, among other helpful initiatives.